A game of fear and isolation for 3 to 5 players who would go into a bunker in the woods to follow something horrifying.

Chase the H0ll0w is a secret identityroleplaying game that tells a story similar to creepypasta fiction over the span of about two hours. It is intended for 3 to 5 players with one of those players taking on the role of game facilitator.

Players portray a group of internet sleuths exploring an abandoned or hidden place that is haunted by something terrifying and strange. They will be attempting to learn enough about it to solve how to get it to stop chasing them and (hopefully) to get their friend back who was already taken.

This game involves horror elements that may not be suitable for all players.

*16 A5 pages of rules and supporting materials, enough to play a one shot adventure

*Edits and revisions based on player feedback

*A4 sized h0ll0w, role, and GM sheets for easy printing

Yes, tabletop games are undervalued and your payment directly helps out an independent game designer! If you are not able to pay this amount, I'll be keeping a collection of community copies.

Alternately, if you think this price is steep but are comfortable with ongoing patronage, you can receive 100% of my non-contract game design work in pdf form as well as some other benefits by backing me at my always pay-what-you-can Patreon.

In order to download this ttrpg you must purchase it at or above the minimum price of $15 USD. You will get access to the following files:

Support this ttrpg at or above a special price point to receive something exclusive.

Don't be shy about this, games are meant to be played and copies sitting here don't help anybody. If you do take a community copy and you're feeling weird about it (please don't!), you can consider us fully, 100% totally even by talking about it or leaving feedback!

This game looks super cool and I'm excited to try facilitating it this weekend. I have some questions about the mechanics though.

1.) We will be a group of 3. How do I as both the facilitator and a player distribute roles to each of us in secret if and I'll know what roles I've distributed. Wouldn't that give me an unfair advantage?

2.) The PDF says that if there are three players to give one player two roles. But a lot of the win conditions on the roles are opposed to each other so is it on me as the facilitator to decide which player gets which two roles? And is it necessary to make sure that every role is fulfilled? Or can we give each player just one role?

Hey, I realize this is a month from when you asked the question, but I facilitated a group of three, so I can maybe help if it's not too late!

1) If you're playing in person, it should be as easy as just handing out the role sheets face down. Digitally, I couldn't think of a way to do it, and just accepted that I was going to know who had what roles. Maybe if you had somebody not playing who was willing to divide them up and text out assignments, or drop spoilered messages in a Discord that people can click and claim?

2) When I facilitated, I checked if anybody wanted the second role, then took it for myself since I was more familiar with the game. Some people love playing multiple characters, some hate it, so that's probably the best way to handle it.

I DO think the game is playable with one role missing, but it may mess up the math a little bit.

Chase the Hollow is a very moody creepypasta simulator! Really neat core mechanic that leans into the tropes of the genre, until only one is left.

Plus, this game plays in a design space that I've always been interested in - when a player is Taken, they still get ways to help from beyond the grave! Extremely cool.

Looking forward to giving this one a try! 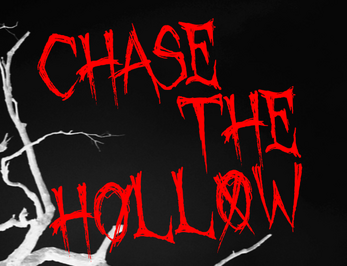